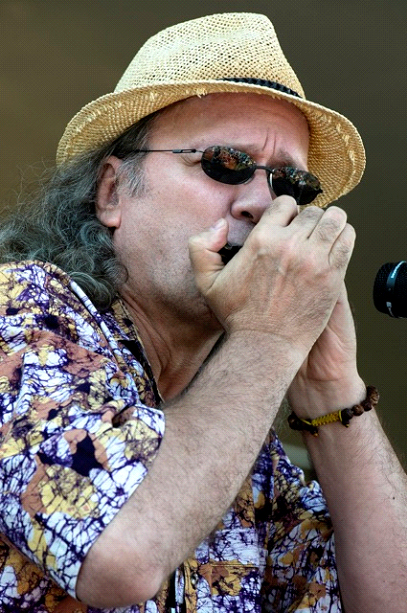 Singer, songwriter and acclaimed harmonica player Grant Dermody’s devotion to the blues naturally leads him in different directions. While his last album, Digging in John’s Backyard, found him collaborating with guitarist Frank Fotusky on a set of songs that paid tribute to John Jackson, a foremost practitioner and proponent of Piedmont blues, his upcoming effort, Behind the Sun, finds him returning to electric blues with a full band and the inspiration and influence of Louisiana, the place where it was recorded. The title itself references a song by Muddy Waters while also capturing the sentiment and sincerity that shine through in each of its 15 tracks.

As he’s done in the past, Dermody worked with an A list of outstanding musicians, including longtime colleague and acclaimed guitarist Dirk Powell, accordion player Corey Ledet, bassist Lee Allen Zeno, drummer Gerard St. Julien, and backing vocalists Teka Briscoe and Ahyris Navarre. So too, the album encapsulates the distinctive sounds of Louisiana, environs that inspire its own take on Americana and the blues in particular.

Dermody points with pride to the fact that everyone involved were Louisiana artists — “Louisiana musicians, the graphic designer, the photographer. Everybody.”

What’s more, Dermody is quick to tout the credentials of his fellow musicians. Powell is a four-time Grammy

Award winner and widely recognized as one of the most skilled musicians operating in today’s traditional realms, a multi-talented instrumentalist who’s adept at guitar, banjo, fiddle, and piano. Zeno’s credits span hundreds of albums, including recordings by Sonny Boy Williams, Irma Thomas, Solomon Burke, and any number of others that span styles ranging from soul to zydeco. He and St. Julian also toured with Buckwheat Zydeco for many years. “It’s like they breathe in sync,” Dermody insists.  “They’re just so locked in and so cool to work with.”  So too, he notes that Ledet, a Grammy nominee, has been cited as the heir apparent to Clifton Chenier, the accordionist hailed as the King of the Zydeco.

So too, it’s evident that the admiration extends both ways. “Playing music with Grant is like entering another world, where there’s no pain or suffering, only joy and happiness,” Ledet maintains.

“I think Grant is one of those one of a kind players that comes around only once,” Zeno added. “He’s a great player and very attentive. I love what he does.”

Dirk Powell offers his own praise of his pal. “Grant Dermody plays the harmonica with power that is equally effective and evocative, whether held in reserve or allowed to wail to its fullest and wildest degree,” he says. “His musical voice, both through the instrument and singing itself, reunites forms and feels that are not-so-distant cousins into one wide and calmly flowing stream.”

Naturally then, given that mutual admiration and respect, everything fell into place from the outset. “We just did everything live in the studio, which is where all the magic happens,” Dermody recalls. “It’s like when you start playing, and it all clicks, then you know, you’re gonna get it all down right from the start. Everybody’s smiling and feeling good. And the jokes start flying around. The four of us had never really played together before, but we just went in and took the time to feel each other out. But that didn’t take long. Before we knew it, everybody had settled into a pretty easy groove.”

That’s evident at the outset, from the blustery boogie of “Trouble No More” and “Don’t Boss Me,” through to the demonstrative determination found in “Forgive Me,” the insistent instrumental “Lost John,” the solid stomp of “Footsteps in the Hall,” the assertive strains of “Tell Me” and the steady stride of “She Come Running.” Other offerings find them varying the pace, courtesy of the mellow ramble that permeates “Mourning Dove” and the acapella gospel sound soaring through “Time Ain’t Due.”

Of its fifteen songs, nine are original compositions, including four by Dermody, three by Powell, one by Powell, Zeno and St. Julien, a traditional tune adapted by Dermody and covers that come courtesy of Muddy Walters, Rick Estrin, Jimmy Reed, Kim Wilson and Otis Rush.

Dermody himself provides his own analysis of the proceedings. “Behind the Sun, like the place where it was recorded, brings the silent heat, the harping cold, the joy of life, love and community, and the pain of losing parts and pieces of each and all of it,” he says philosophically in summing up the sentiment. “We recorded live, so it all was created, and lived in that very moment. It tells a story that came long before us, but one which we add to because it’s a part of us in the multitude of ways that we both lived and loved.”

The new album continues the momentum maintained by Diggin’ in John’s Backyard. It made its bow on January 14th on the Acoustic Blues chart of the Roots Music Review, and subsequently climbed to number one, where it remained for 13 weeks in a row, giving it a total of 14 weeks at number one. The album has now been lodged in the top five for five months.

So too, the new album finds Dermody continuing a tradition begun in 2015, when he first recorded at Powell’s Breaux Bridge, Louisiana studio. That relationship was further nurtured when Dermody opted to make a permanent move from Seattle to Lafayette Louisiana where he currently resides.

“Leaving Seattle was hard to do, and it was a big deal,” he recalls. “Coming to Louisiana with COVID, hitting…all of that was challenging. But meeting the people here who love the same kind of stuff that I love as far as deep blues is concerned, and making a record with them assured me that everything was the way it was meant to be. That’s really what this is all about. It’s not any more complicated than that. It was time to make a record, and at that point, it was immediately obvious who I was going to do it with. We ended up doing it with the very best people available.”

Given that diligence, it also ought to come as no surprise that after four previous albums as a solo artist, another three recorded in tandem with his various bands and innumerable appearances as a special guest on nearly two dozen recordings by other artists — Eric Bibb, Dirk Powell, Dan Crary and Cedric Watson, among them — Dermody is now recognized the world over as one of the most profound and prolific harp players making music today.

“Grant Dermody is one of the greatest blues and roots harmonica players around,” Eric Bibb adds. “His playing reaches deep into the well of tradition and at the same time takes the music to exciting new places with a very personal sound. Working with him in the studio and on the stage is always a pleasure.”

Others echo those accolades. “Grant Dermody’s harmonica is so rich, full, and alive, you could live in it. With your family. And your kids. Because it’s also in a great school district,” American Blues Scene once wrote.  Americana Highways added its praise, saying, “Grant Dermody successfully mines a deep shaft of the traditional vein heavy on juke joint greasy blues and though he could explore more deviant & lowdown strains he does an admirable job — spirited & authentic.”

All About Jazz out it more succinctly. “Grant Dermody is a national treasure!,” it declared.

In fact, it’s all part of a trajectory that Dermody has maintained from early on. Growing up in Seattle, he was given his first harmonica by his father at age 18. Jimmy Reed, Little Walter Jacobs, Sonny Boy Williamson, and Walter Horton offered his initial introduction to the blues, but it was seeing Sonny Terry and James Cotton live that really captured his imagination and showed him what the big sound really was. After initially delving into electric blues, he soon found himself drawn more to acoustic sounds and a format consisting of harp, guitar and/or mandolin. After an extended sojourn to Alaska, he returned to Seattle and studied with author/musician Kim Field who, in turn, encouraged him to investigate the sounds of Howlin’ Wolf, Little Walter and Big Walter.

“Kim showed me what it was to be good,” Dermody says in retrospect. “Once I heard people creating that big open sound, who played music that really moved me, I realized that that was what I really wanted to do. That’s what I was really going for.”

Dermody eventually connected with The Improbabillies, with whom he recorded a self-titled album in 1998. He later produced two ensemble efforts, Crossing That River (featuring 16 musicians) in 2003, followed by his sophomore set, Lay Down My Burden (which included 26 guest artists) in 2010.  The latter was recorded at seven different studios. Sadly, Lay Down My Burden marked Cephas’ final recording, a duet between him and Dermody that resulted in a sizzling live take on  Skip James’ “Hard Time Killing Floor Blues.”

In 2015, Dermody released Sun Might Shine on Me, a critically acclaimed effort that found him making his initial pilgrimage to Dirk Powell’s Breaux Bridge, Louisiana studio facility where he recorded with a core group of three musicians — Dermody, Powell, and Orville Johnson. Other musicians, including Cedric Watson, Rich Del Grosso and Jockey Etienne were brought in for added embellishment. The album was recorded mostly live in five days at Powell’s studio.

For the past 15 years, Dermody has had opportunity to play and record with some of the best in the business, among them, such blues legends Honeyboy Edwards, Robert Lowery, Big Joe Duskin, John Jackson, and John Dee Holeman He’s toured the U.S. and Europe, both on his own and in tandem with an ongoing trio that includes Orville Johnson and John Miller. The group’s recorded two albums to date, Deceiving Blues in 2006, and We Heard the Voice of a Porkchop, released in 2011.

So too, Dermody’s always been willing to share his skills with others  and then bring it back around. He continues to teach harmonica in both private and group settings to students of all ages both here and abroad. His goal, he says, is to help students find their own voice on the instrument.

In addition to releasing the new album in October, Dermody has also announced that he will initiate a harmonica camp located in Lafayette beginning on October 20. He’s dubbed it “Blown Away on the Bayou,” and it will feature several guest instructors teaching acoustic blues and Cajun-style harmonica.

It’s all part of his ongoing mission to share music through a common bond. “We may not have all come from the same part of the world, but we speak the same language,” Dermody reckons. “We may have different accents and dialects, but we hear it and feel it and keep digging to find more of it. It’s all a reflection of what the blues can do.”